New at her job! ​​​​Saonee Sarker is the new Directly appointed Professor at Department of Informatics. Join in for a talk about why she chose to work at the department, the best thing about Informatics, technology innovations yet to come and the best innovation ever. 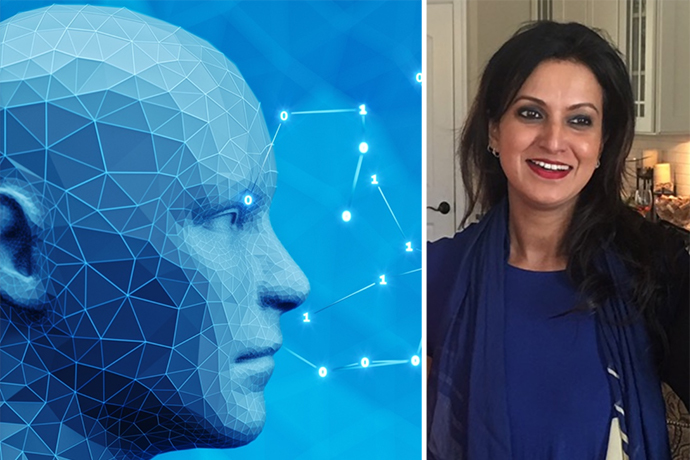 When Saonee Sarker did her MBA she put a focus on marketing which led to work at a couple of technology start-ups where she got to work with user interface design. This in turn led her into the fields of Information Technology (IT) and information systems. IT-based collaboration became her area of interest and the research area of her thesis in 2002. A research field that Saonee has continued with since then.

”Things like collaboration in virtual teams were just emerging back then, in 2002," Saonee says.

”This has over the years evolved into studies of software development in globally distributed settings. How you can develop software when you have for example a developer in India, a client in the US and the designer somewhere else, say in Scandinavia. The development of this is something I have looked into during the past 20 years.”

Tend to forget the people

Saonee has through the years worked a lot with issues concerning IT and human wellbeing, that include issues such as work life balance and technostress, especially in but not limited to the distributed work environment. At different companies she has worked with solutions and methods for handling those issues with a focus on the people working in such arrangements. This work eventually led to several research publications and the book 'Navigating Work and Life Boundaries. Insights for Distributed Knowledge Professionals' which is said to have 'a unique focus on the role of technology'.

”We tend to forget the people, the people who make things work. We have met a lot of new challenges when working from home during the last two years. Work life balance and stress have become increasingly common issues,” Saonee says.

Saonee chose to leave a job as a professor at the McIntire School of Commerce, University of Virginia and come to Lund:

”I knew LUSEM since I had come here several times as a visiting professor and I was aware of the interesting work that is going on here. I also got to know some colleagues and I enjoyed working with them. The Department of Informatics is well known and has a good reputation. What I can bring is an energy in research, a focus on grants and publications in internationally reputed journals, and access to the global network of scholars in our discipline.”

So what informatics does is blend knowledge of business, organizations, society, and computer science. We make technology more humanized, so to speak, for everyone.

On the question about what is so interesting about the discipline of Informatics Saonee gives a vivid description:

”We are all surrounded by technology. In every aspect of our lives. We can’t live without it. Often technology is developed to become more efficient, more superior. That doesn’t mean that it will work in every context. So what informatics does is blend knowledge of business, organizations, society, and computer science. We make technology more humanized, so to speak, for everyone. We are at that intersection, which makes our role crucial and interesting. We understand enough of the technology to say that this particular technology needs to be tweaked or molded to fit this context. The application and implementation in the business context is not the strength of pure computer scientists, we facilitate the application and implementation. So that is one of the greatest strengths of informatics! Only because the technology is really good doesn’t mean that it's going to work.”

”Great technology may be developed and designed in a way that is technological superior, but someone has to make sure that it fits into the context. We bring that fit! That is what the discipline is all about. We look at technological issues, we look at the contextual issues, at the environment, at the organization. And we ask 'How would all this work well?' That is Informatics! We have a holistic view. We make technology work in a particular context and say: 'Don’t go after the most expensive technology.' Sometimes, we might go for a less expensive or sophisticated technology as long as it works and makes the specific work more efficient.”

Have we seen it all and the best technological innovation ever

Having worked with new technology for more than 20 years, seen the development and learned how to make the technology work in the context, one might think that Saonee just wants more of new technology. Or have we seen it all?

”I think we are going to see more innovations. But the question is, should we go after them? I feel scared because it’s not only the technological innovations. There is so many implications of it, so much data, data that is stored, used, shared…There are also questions about ethics concerning different data. Where do we draw the line, where is the limit? And then there is AI or Artificial Intelligence. We have definitely not seen the end of innovations – far from it – but I hope that we draw the line somewhere and pursue innovations thoughtfully," Saonee says.

"There might not be any world for us to experience if we just go after innovation for the sake of innovation. We must take caution.”

And finally, what does this Professor in Informatics, who has seen technology innovations come and go, think is the best technological innovation developed ever?

“Anything that brings the world to our homes. That can enable us to co-create value, meet and collaborate with colleagues. Meet friends that are thousands of miles away…that is a huge innovation. To collaborate without being in the same room. If we hadn’t done that, the world wouldn’t have worked the last two years…,” Saonee concludes.

Professor at Department of Informatics